Their home alley is the London Inn in Charlton Kings where they play on Monday nights.

The team was named after the Paul Newman film and was formed by Dave McCaffrey in the 1963/64 season as a spin-off from the Early Birds who played in the Cheltenham Civil Service league. The Hustlers started life at the Brown Jug in the Bath Road, but general dissent within the young team soon caused some members to break away and form another team, the Sinners, which was active until 2014. The Hustlers survived those early years and in 1965 moved from the Brown Jug to the Rugby Club, then in Albion Street. It was there on 16 April 1973 that John Gingell, one of the finest players to bowl for the Hustlers, scored 70 (16, 9, 9, 11, 9, 16) which is still the highest individual score in the team.

In September 1974 the team moved from Cheltenham’s shortest skittle alley, in the terrapin hut that then served as the Rugby Club’s headquarters, to the Midland Hotel, with one of the longest alleys. However in the mid-1980s, after another of the periodic crises that 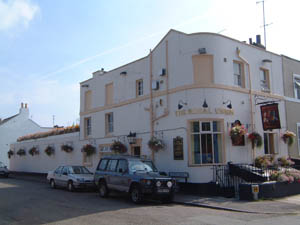 hits the team, it was decided to move to the Royal Union in Tivoli (pictured left), where the Hustlers remained until the end of the 2000/2001 season. These were the golden years of the team, in which promotion became almost an annual occurrence. Then, following a change of landlord, came a short dalliance with the Merryfellow Inn in Charlton Kings before high beer prices caused the Hustlers to move again, this time to the Suffolk Arms in Tivoli where they stayed until 2017 when the pub refurbishment caused The Hustlers to look for a new home and settle at The London Inn. The Hustlers engage in a number of non-skittles social activities of which the highlight is a spring break with wives, girlfriends and sheep. This trip, which has been an annual event since 1989, has recently included overseas visits to Santander, Bruges, Amsterdam and Prague. Photographs from these trips will be added to the site soon.

Most players in the team have been skittling together for many years and some of the oldest are now beginning semi-retirement as non-playing reserves – registered but not normally selected. However, they remain Hustlers in all but skittling and continue to take part in the social activities. In recent years the team’s policy has been to encourage younger players to join in order to maintain a good demographic balance.